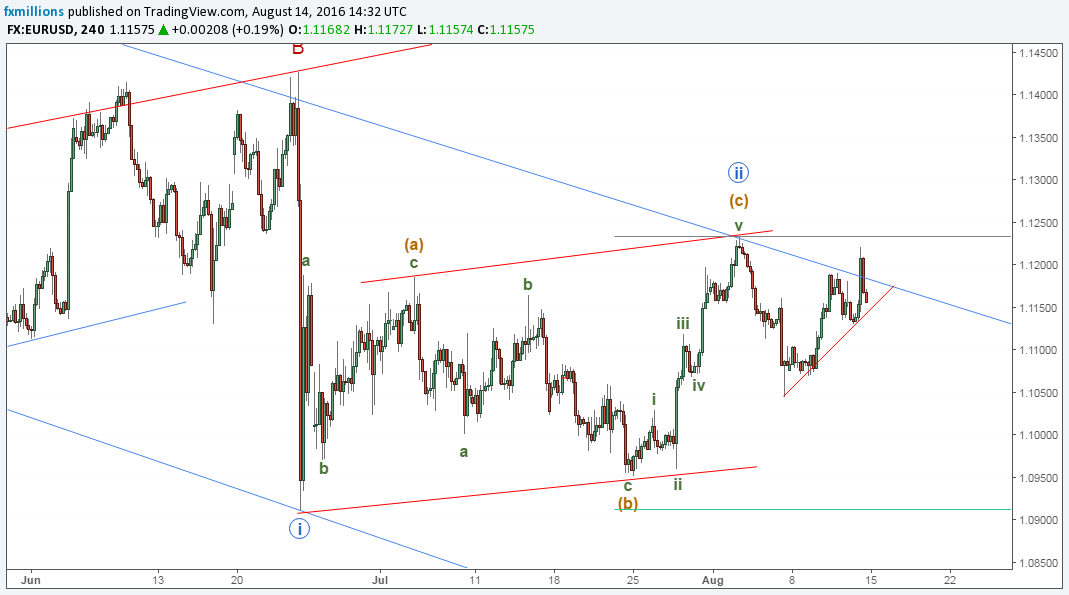 When you do weekly forecasts, you realize how slow the markets move each week. This is true even for highly liquid and most traded forex instruments like EURUSD. This may be a fast-paced world, but the markets are slow cumbersome beasts. That is why patience is critical to be profitable in this business; you should time your entries and exits to catch only the high-probability impulse waves. Rest of the time you have to sit on your hands – doing nothing.

EURUSD chart shows one such impulse wave in the making. The momentum of an impulse could be determined by how sharp the preceding correction is. That is why in Elliott waves principle, wave-2 is often a sharp ZigZag which recovers most of wave-1; creates the foundation for the most vicious impulse – wave-3.

EURUSD closer to a breakout

Last couple of waves on this Euro-dollar 4 hour chart is yet to be labeled. But you get the idea of what exactly to expect next. On last weeks forecast, we expected a correction before a decline. However, the correction was both sharper and longer than expected. In fact it is a sign of a sharp decline to follow. That adds to the confidence and profit potential of the next short trade as well.

A chart forecast for several months into the future is not important. But if you follow Elliott waves methodology, you have the ability to predict subsequent waves with astonishing accuracy.

In my opinion, there is no method to comprehensively dissect a corrective structure, but only the Elliott waves principle.

Until the market proves otherwise, it is safe to assume that wave-3 is in progress. So the expectation is for price to break below the structure bottom for a sharp decline.

Any pullback or correction in lower degrees is an opportunity to short. But the corrections marked in blue on the chart are for illustration purposes only. So they hold no significance in terms of time or price. However the general idea is to trade the wave-3 at every opportunity, when presented.

This is not a trade signal. Analysis on this post is for educational purposes only. However if you chose to trade it with real money, be cautious. Because the short bias is based completely on assumptions that the current wave-count is correct and the wave-2 correction is complete. Be prepared and protect your trades, in case the market proves otherwise.