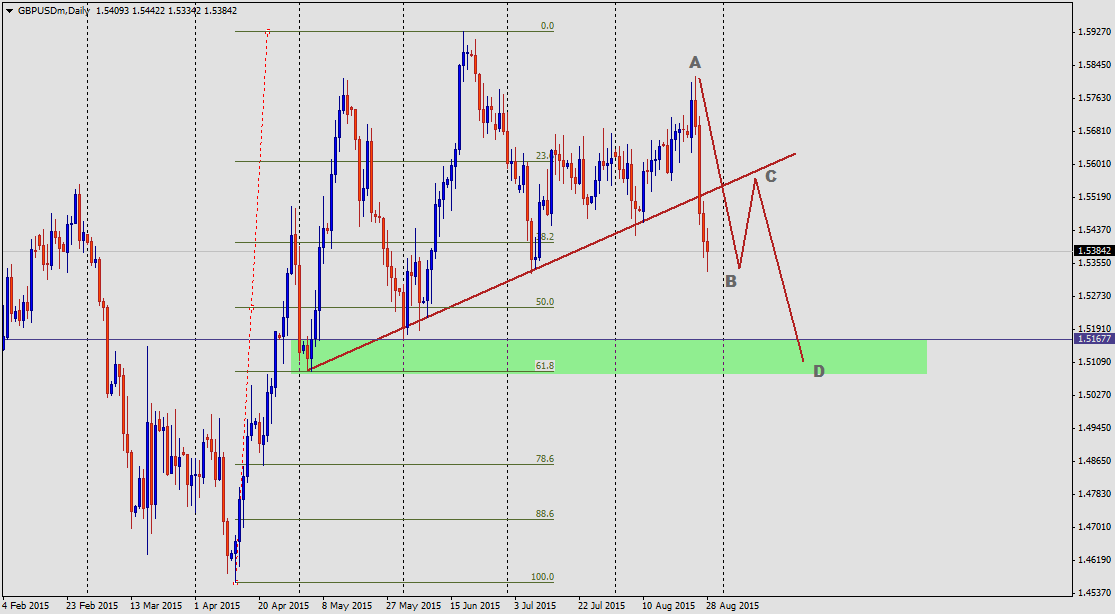 If you trade GBPUSD quite often, then you know it has been bonkers for the past few months. But price pierced through the ‘Daily trendline support’ on the 26th as the pair have been heavily bearish throughout the week. This could be a bearish corrective wave, nevertheless price seem to have gotten out of the stranglehold, at least for the time being.

So what now? My expectation is for a retest of the trendline and a bearish move to create an ABCD pattern. But be very careful if you plan to trade this pair anytime soon, because price movements have been so unpredictable on this pair and  I had to eat the humble pie several times, during the past few months.

Nevertheless, this is my projection for the forthcoming days. Its just a possibility, remember price can do anything it wants. By no means this is to be considered as a trade setup or a signal. This is only my opinion.

If price does not retest the previously broken support (which now serves as resistance,) then it means there’s still bearish momentum and the B point could be dragged further down.

Whether price wants to continue down or reverse to the upside, we have to expect the price coming back to the trendline. Next contact point of the trendline is the decisive moment, and the current momentum is also another reason to take a short trade on a pullback.

Since price has to pullback anyway, what level is better to bounce off than the current price? Have a look at the chart.

If it doesn’t bounce off the current price level, the next clear level is the green rectangle, which is the D point or the PRZ of the projected ABCD pattern. However if price does move down without a pullback, then there is very little chance the next pullback would retrace all the way back to the trendline.

How was the PRZ (price reveresal zone marked in green) decided where its now?

Fibonacci confluence combined with horizontal levels is the short answer.

Price contact points of the trendline where price clearly bounced off, have been marked with numbers 1 through 4 on the chart. Lets dive into the fibs.

Obviously there is the 61.8% golden ratio of F1 is seen as the bottom boundary of the PRZ. Furthermore point 1 price level too coincides with the same golden ratio.

Another important reason is that price doesn’t seem to stay in this zone for too long, and has been rejected for both sides on several occasions. History leaves clues.

Whether price pulls back to test the trendline or not, price is more likely to be attracted towards the PRZ and be rejected swiftly.

Welcome any comments specially if you have a different point of view, please share.