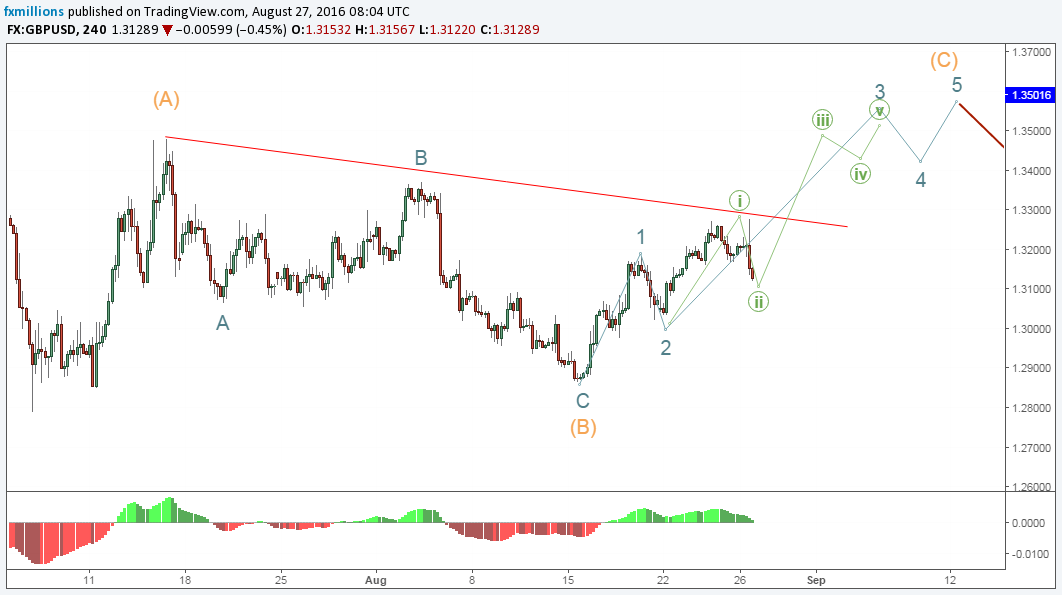 GBPUSD is at the verge of a very lucrative trading opportunity. If you remember, las week I posted about the possible bull market continuation. If you missed it, here it is: GBPUSD Elliott wave analysis and weekly outlook – 22nd – 26th August 2016.

Although we got the bull market, we did not get the expected deep pullback. On the other hand, Friday was heavily bearish. So we have an ambiguous wave-1 in the current count and a couple more alternative wave-counts. Alternative counts bring totally different perspective on the current market condition and the forecast for next week as well.

Obviously, the Cable is in a prolonged long term correction. Assuming the wave-1 position from last week is correct, the market is currently now in wave-3 (light blue.) Zooming into the lower degree, it seems the market could soon begin the Minute wave-3 within Minor wave-3. Wave-3 on two adjacent degrees is always a vicious combination. However, the strong bearish wave that started on Friday may have some steam left, and could retrace most part of the lower degree wave-1.

But if the current lower degree wave-2 breaches the low of higher degree wave-2, this count will be invalidated. In that case the following deviation will be considered the next most probable scenario. The difference is the end of Minor wave-1.

Both variations of the wave-1 is possible, because it includes a valid impulsive sub-wave count of 5 in both cases. The expected overall corrective structure in both cases is obviously an ABC ZigZag. However, there is an alternative count that argues the wave-B is still in progress within he same ABC ZigZag.

In order to avoid surprises and bad decisions we should explore all possible scenarios in a chart. It’s also a good practice not to stick to a single idea or forecast. Markets change very quickly. In order to keep up with the market, the expectations and analysis’ should change and adapt accordingly as well. There comes the need to analyze alternative wave counts.

Obviously, there is no absolute forecasting model although wave analysis in my opinion is the closest you may get to forecasting any market with impeccable accuracy.

Having said that, it’s very important to understand that wave analysis was originally developed to analyze past data and not as a forecasting tool. But some powerful attributes of the wave principle allows one to make educated assumptions a little further into the future.

The ambiguity of wave-1 questions the probability of a totally different outcome. Hence the need to look at alternative wave-counts. While it seems quite sensible to expect the continuation of wave-C, there is however another possibility.

This wave-count assumes the Intermediate wave-B is not complete yet and the overall wave-B is a complex triple-three. If you are not familiar with wave structures please refer to – a complete guide to Elliott waves principle. The trendlines are only to distinguish the overall wave-B, and does not by any means represent target levels.

The wave-Z component here could be any corrective pattern – ZigZag, Flat or Triangle.

Wave-4 corrections tend to be more sideways than wave-2 corrections. Alternation theory in the Elliott wave principle is more supportive of this count. Because the Primary wave-2 was a vicious ABC ZigZag.

There is a long way to go in the Primary wave-4 before completion. This is the single common fact among all three wave-counts presented on this post. In terms of time, it could take days, weeks or even months. In terms of pips, it could cover lot of ground to the upside manifesting the Intermediate wave-C or stay stagnent within the triangle boundaries.

Now then, it leaves us traders with an interesting conundrum that will certainly be resolved with time. However, the most importnat point is to identify the end of the overall correction.

Forecasting an ongoing correction is not an easy task, let alone identifying possible end of a correction. But it is all we need to do, in order to catch the next impulse. However, next week GBPUSD should provide some clues regarding the overall corrective structure in the making. In terms of direction, there is not enough conviction for either side. All positions (if there will be any) must have very short term targets.