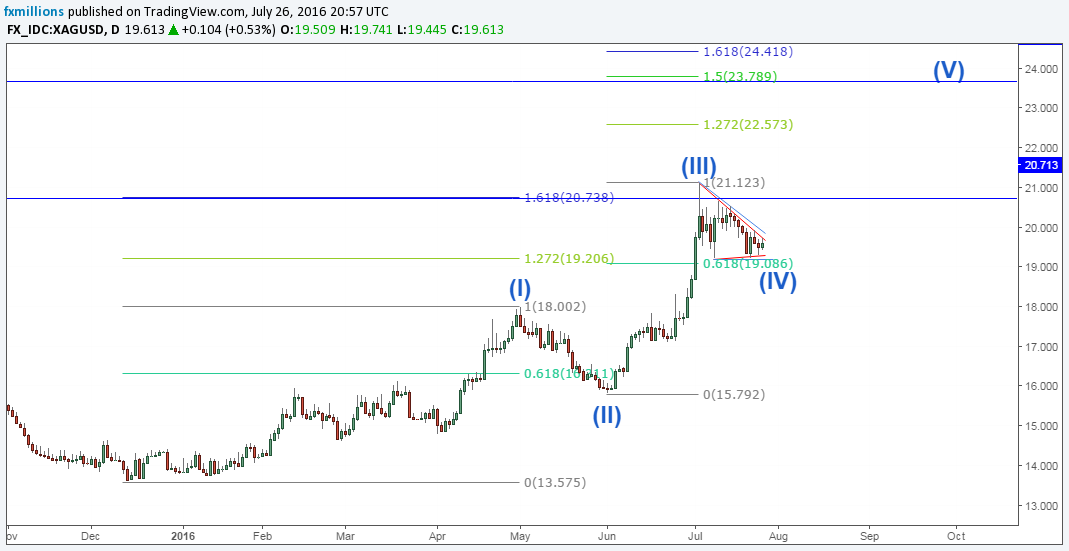 As we all know XAGUSD (Silver) has been in a corrective structure since 4th of July. The recent highest high was recorded on 4th of July at 21.106. The lowest price of the corrective range was recorded as 19.195 last week, specifically on 21st July. Apparently silver is in a tight sideways move for the last 3 weeks.

In which direction should it break?

There is no 100% guarantee in forex, or any other market for that matter. But analyzing the wave structure, according to Elliott waves as well as other chart patterns, its quite clear the direction is still upwards. Since the previous impulse was bullish and very steep, the correction could get even deeper: Even closer to the range of 61.8%-78.6% fib retracement is a possibility.

None the less, price action so far has established a strong demand zone just above the 38.2% fib level. Price could also create a “throw-over” effect or a stop-run (both terms refer to the same phenomenon,) before actually commences the 5th wave impulse.

However, the corrective structure too is showing evidence of a conclusion. But with regards to retracement, price never even reached the 38.2% fib level. If current correction is the 4th wave of a higher degree impulse, which by the way has all the necessary characteristics of a 4th wave correction; then the deeper pullback shall materialize after the 5th wave completion.

A possible triangle pattern is the reason why the correction may be at its final stages. As mentioned, price could break the bottom boundary for a brief moment before the impulsive bullish wave (assuming the blue triangle is in progress.) In case you haven’t yet figured, both triangles (red and blue) are valid. But its also a possibility that price declines much deeper, creating a totally different pattern – an ABC or a WXY perhaps. 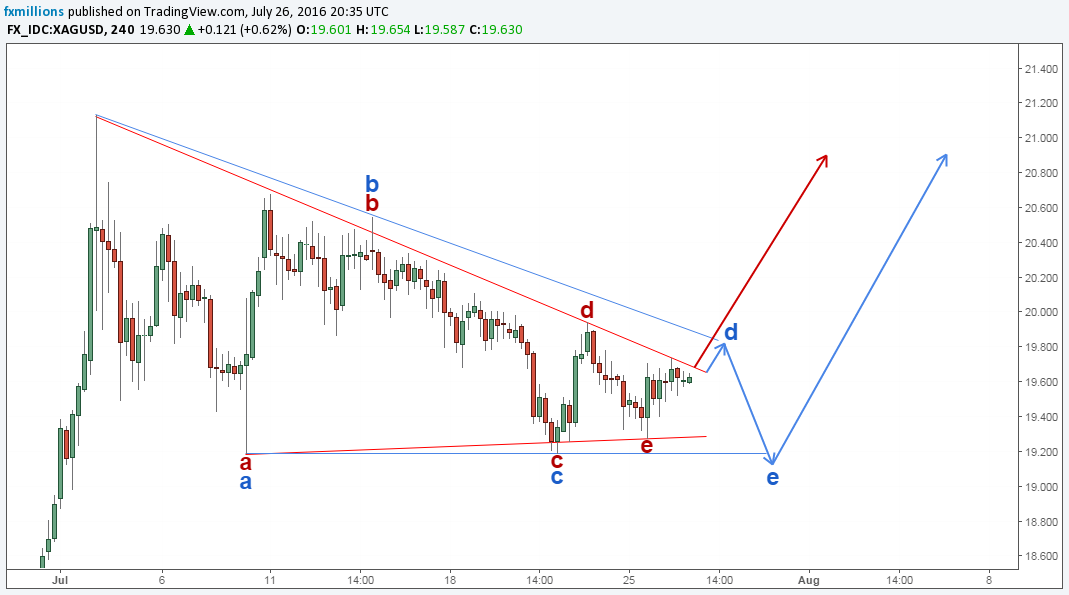 Yes, I know. The strictest Elliott-wave-trader would argue about the red triangle. Because of the wicks hanging beyond the boundary lines of the triangle. There are reasons and you may refer to the Elliott waves tutorial for more insight.

This is a mere forecast based upon the information we have so far. The previous steep impulse provides enough characteristics to say that it may be a 3rd wave. Combining that information with the currently on-going sideways correction (which may be the 4th wave,) provides enough clues to expect the 5th wave impulse to the upside. That is the basic thought process.

However, we did too forecast the 3rd wave right at the end of the 2nd wave correction. Here’s proof:

Did price follow exactly the arrow heads, in same projected momentum? Its no magic, but proof that Elliott wave principle is an awesome method to do forecasting. Of course the market could have gone either way. We don’t know what price is about to do next. Nobody knows what events or news will drive the markets. If you add the ambiguity of “when” and “why” to that question, it gets even more complicated.

But this time, the average know-it-all economists may be in agreement with this forecast, in terms of long-term direction of the price of Silver. Because silver too is considered to be a “safe haven.”

Remember, there is no recent price action above the last high. If price breaks out of the last higher-high, XAGUSD (Silver) has a vast area of open waters ahead, in order to surf as it may.